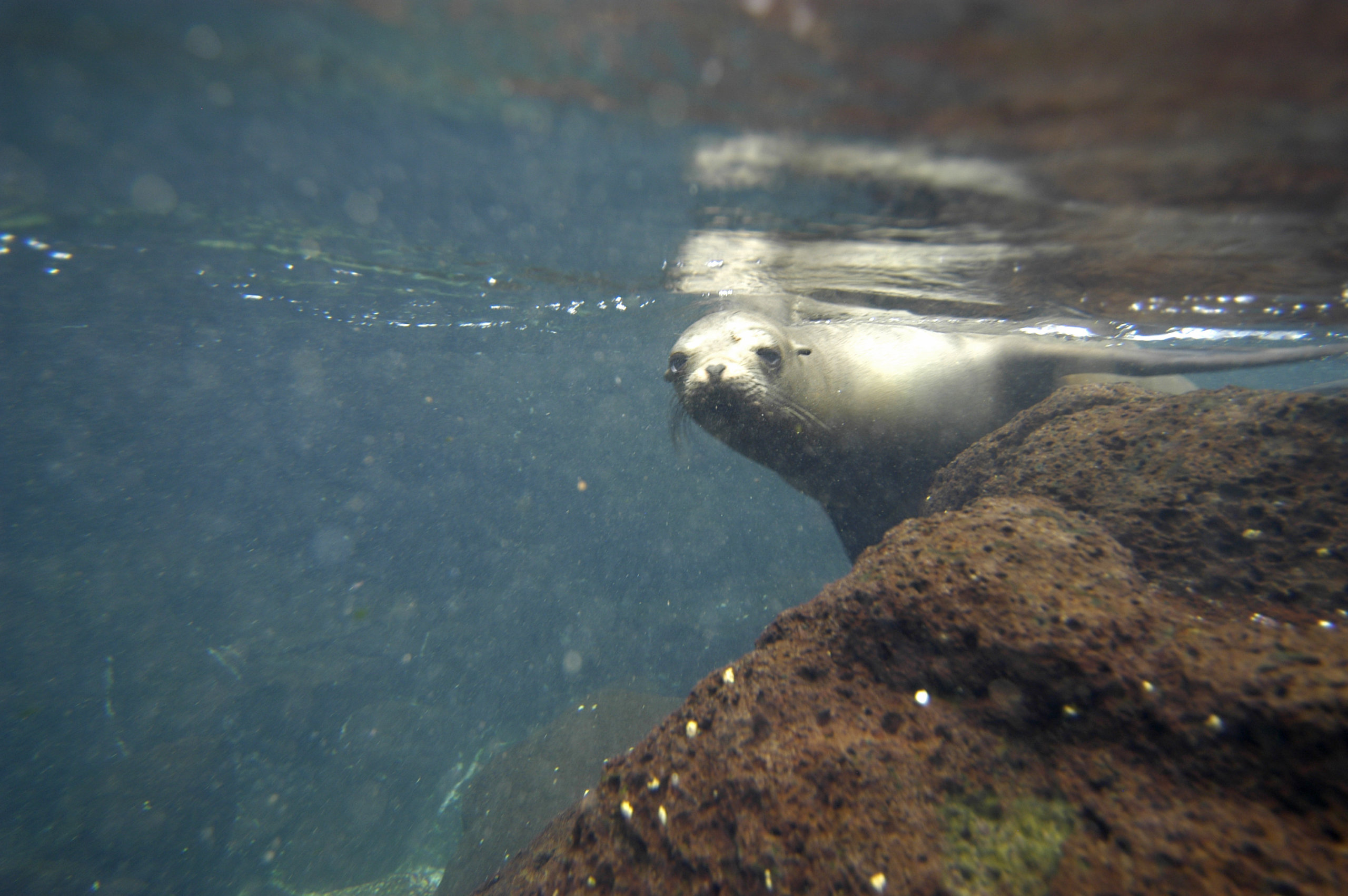 On Wild Women’s Baja Kayak and Whale Adventure, swimming with sea lions didn’t jump out at me when I’d first read the itinerary. I had “swum” with dolphins in the wild before, but that entailed the boat catching up with the dolphins and jumping into the water as the dolphins swam away at speeds much greater that I could swim.

I had low expectations of this part of the adventure, but I’m always up for new experiences, so I donned the provided wetsuit, mask, snorkel and fins in anticipation. As our boat neared the craggy banks of Espiritu Santo island, where a large sea lion colony lives, we saw hundreds of sea lions lazing about on the rocks. The adult males are massive (500 pounds or more) and can be territorial and aggressive. The sound of their barking filled the air, as they oozed over the jagged curves of the rocky shore, keeping watch. The youngsters played and splashed in the deep water or rested in a pile nearby. 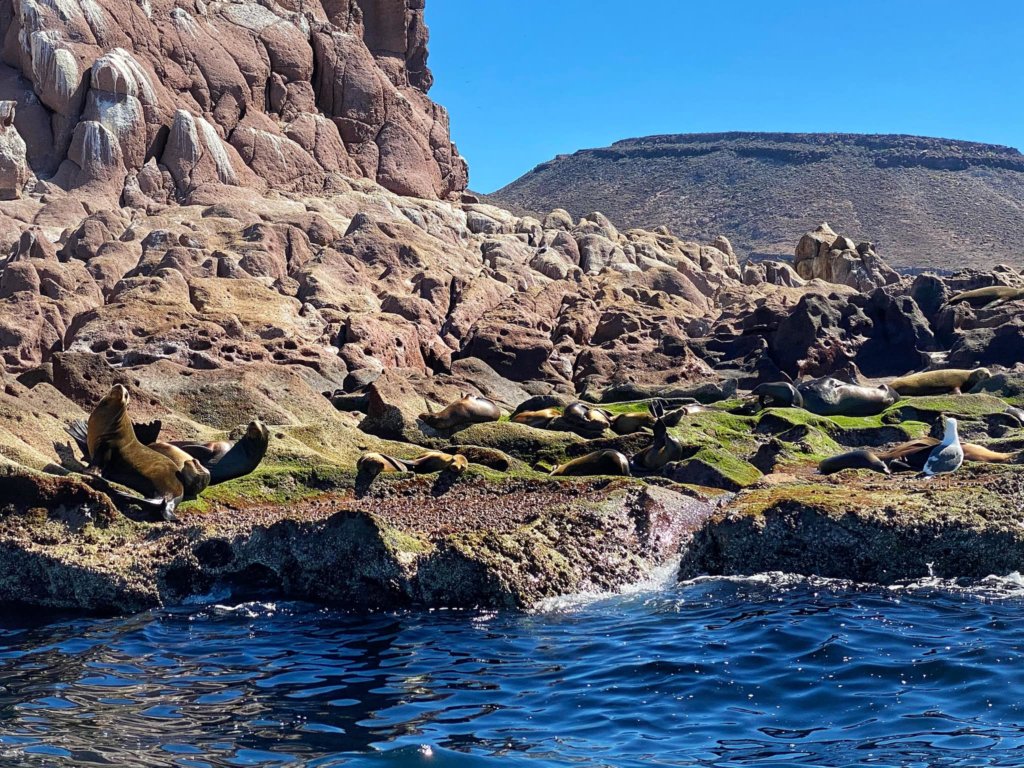 We were told not to approach or touch the sea lions, and that the young ones may want to play with us. If we didn’t want to play, we should cross our arms over our chests to show that we weren’t interested. We were warned to be careful because the pups get excited when they play and will bite, the way a Labrador retriever puppy might nip in playfulness. I had no desire to be bitten by a sea lion! I slipped into the water and swam along slowly, getting used to breathing through the snorkel, and was soon delighted to see schools of brightly coloured fish beneath me. Further below the surface, I saw larger creatures emerge and wondered if sea lions went that deep, only to realize they were humans in scuba gear. I laughed and waved, and they waved back and continued swimming. 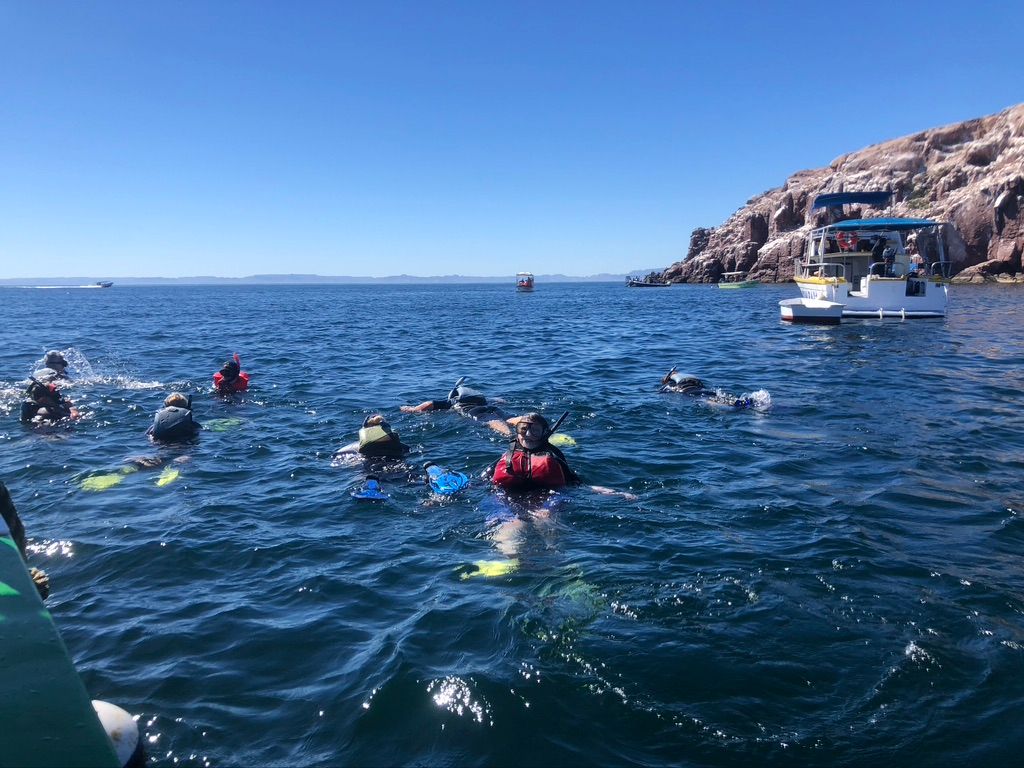 I lifted my head and my PFD (personal flotation device, which is mandatory) flipped me onto my back. As I was rolling over, I saw a dark figure coming toward me on the surface of the water. I immediately crossed my arms over my chest and kicked my fins toward the creature to get away. I spotted several other members of the Wild Women group a few meters away, and swam toward them. Sharon had opted to take the boat’s orange life buoy ring to hold while swimming, and one of our guides, Patty, was with her, holding the ring’s tangled rope out of the water. A few others from the group were gathered around.

As I swam closer, I saw a young sea lion trying to play with the rope that Patty was holding out of its reach. It gave up when it wasn’t able to reach it. Then, its flippers reached up from below the orange ring and wrapped around it, and it wiggled its smooth body into Sharon’s lap! They floated together for some time, then the pup broke away and swam over to Rita, who hosted the pup on her lap for a few minutes, as we bobbed around them taking pictures.

I was intrigued by how unafraid and friendly the pup was with us. It was clearly young — I would guess it was about the size of my own full grown Labrador retriever who is around 60 pounds — and just as curious and gentle.

The pup politely went from woman to woman until it was my turn. I felt it swim up beside me, and I crossed my arms over my chest again, but stayed very still this time. I didn’t want to scare it away. I also didn’t really want to encourage it to play since I remembered how sharp my lab baby’s teeth were when she was young, and the only way she knew how to reach out was through her mouth. Her little nips were quite painful as I was teaching her boundaries, and this sea lion was a much bigger pup than she was.

As I floated on the surface of the water, legs out in front of me, I felt the smooth body of the sea lion sliding along the length of my bare left leg. I held my breath, then exhaled, telling myself to relax. I reasoned that we wouldn’t be allowed to get this close and interact with them if it wasn’t safe. I relaxed my whole body, and completely surrendered to the moment. If I was going to be gnawed on by a baby sea lion, at least I’d have a good story to tell!

What happened next, I could have never imagined. That sea lion pup wrapped its large front fins around my thigh and just held on. Neither of us moved for several minutes, but floated together in complete serenity. I could feel its warmth on my skin below where the shorty wetsuit ended. I felt the smooth fur rubbing against me as we bobbed in the slight swell. With a bigger wave, it held on even more tightly and I felt its rear flippers and tail wrapping around my lower leg.

After at least 5 minutes of floating together in complete stillness, I decided I’d had enough of this sea lion’s affection and I moved my leg. At first it held on even more tightly, and I felt a slight panic. What if it wouldn’t let go and I’d have to pry it off me. Would it bite me or otherwise stake its claim? I moved my leg a bit more forcefully and it finally swam free. I felt the cold water on my skin where the body of the sea lion had been keeping me warm; two warm-blooded creatures, we’d just conserved and shared our body heat! 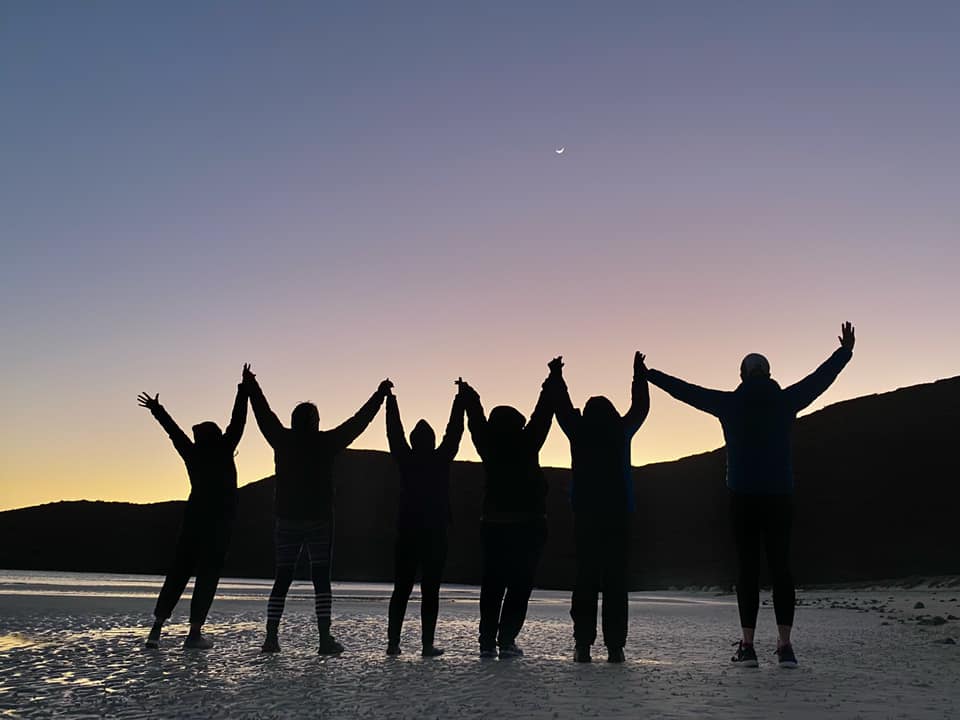 Just as I was starting to feel the chill of the water, it was time to swim back to the boat and head to our first island campsite.

I had no idea what it would be like to swim with sea lions and I’d started out quite certain that I wanted to keep some “social distance” between us. In the end, I was completely won over by the sweet, gentle, loving nature of these animals, and my sea lion hug became one of the highlights of the trip, which was filled with many other delights, on both land and sea. 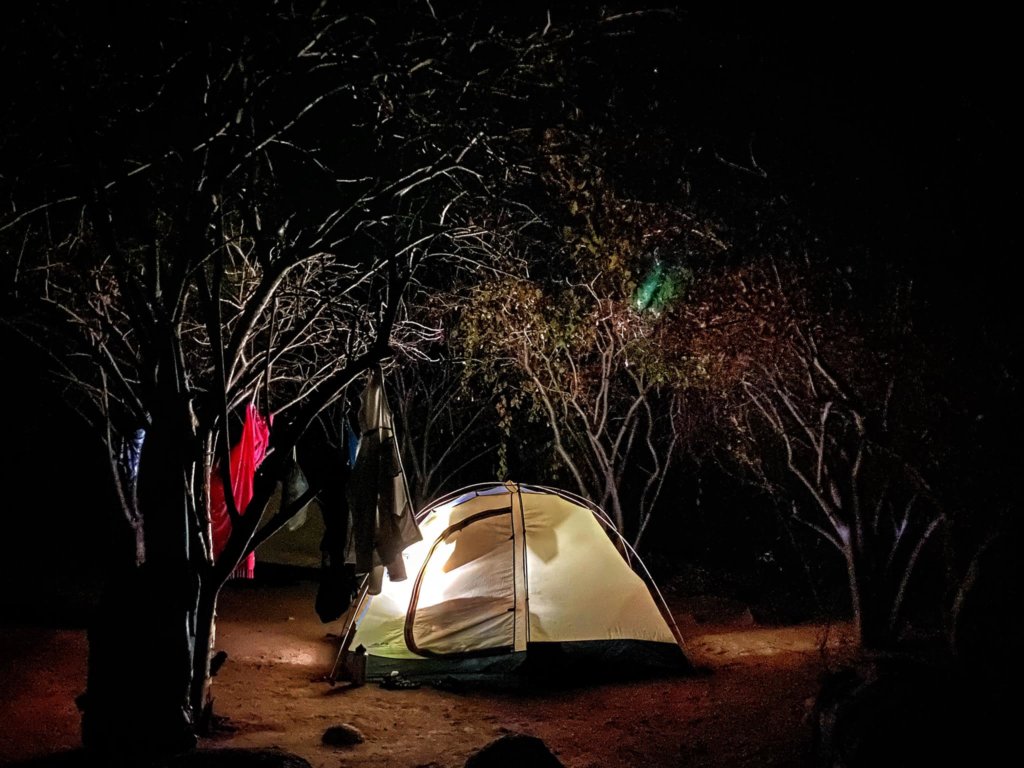 In The Wilds Of Baja, Mexico 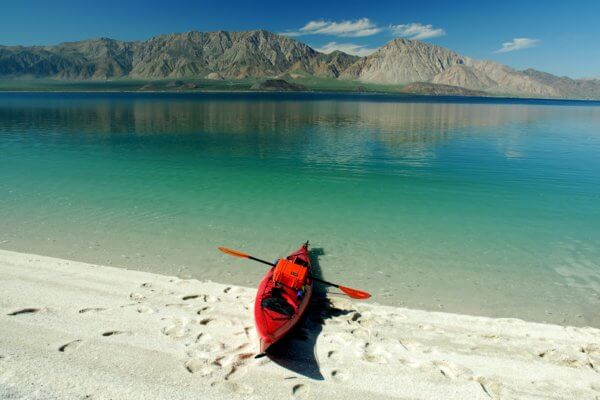