“Wind and rain cocktails” that leave you soaked in minutes. “Knock down gusts.” “Pounding westerlies.”

This is the meteorological trifecta warning in Lonely Planet’s Chile & Easter Island  guide that has led me to remain skeptical about Patagonia. To be transparent (if I’m not already), my default February setting is generally reserved for destinations like Zanzibar, the Seychelles, Sint Maarten, Antigua, Aruba. Basically anywhere that is as hot as Frank’s with zero chance of rain and knock down gusts. 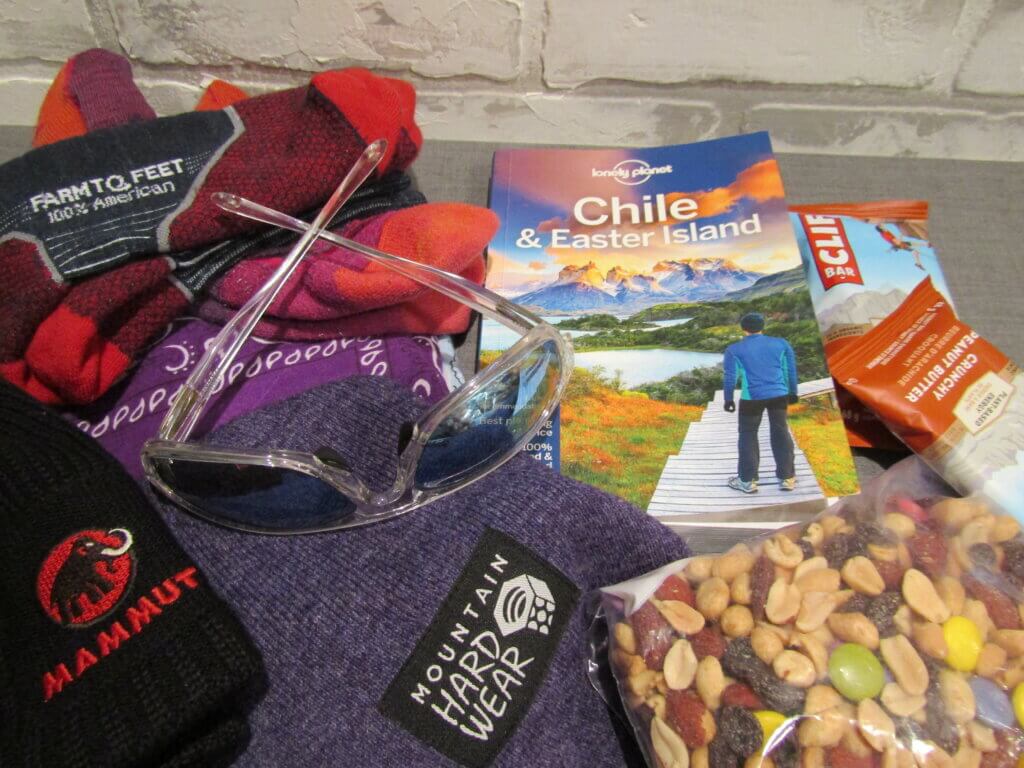 My wife and I are well-versed in wind though. Kim and I were married in the eye of Hurricane Dorian in Heart’s Content, Newfoundland. In photos, our hair looked like we had been electrocuted. In Iceland, we were both unceremoniously swept off our feet by hurricane-force gusts that screamed across the Skaftafell’s glacier fields in Vatnajökull National Park. We were actually blown down and pushed along the path (on our scratched backs) by the wind. Our smiles when we got to our feet looked like we had eaten a handful of Oreo cookies from the volcanic sediment and dirt that pelted us.

Quebec’s colourful Îles de la Madeleine (Magdalen Islands or “Maggies”) are also documented on our wind resume. Every cafe, B+B and art studio has “vent” (French for wind) in its name for good reason.

So, there’s that. Packing for four seasons is a Torres del Paine in the ass! But, I’ll keep my eye on the prize. Tracking pumas and pinot noir!

At 48, I’m not the spontaneous traveller that I used to be. I like to research the heck out of a destination to ensure that we’re going to wring every bit out of it. I want to see online menus and our airbnb toilet in Punta Arenas before we get there.

Visiting Patagonia comes with a few disclaimers–booking flights requires preparing for the predictably unpredictable winds and delays. We’ve bookended our time in Punta Arenas (the rendezvous point for WWE Torres del Paine trip) with extra nights in Santiago, Chile to and fro. While Santiago’s temp is akin to an oven on broil at 32°C, the national park sinks to 3.2°C at night. My sister sends a reminder about minding our sunglasses, “they blew right off my face one day!” BUT the dome accommodations on this adventure look so cool (and hopefully not that kind of cool). The geodesic domes at EcoCamp Patagonia were the first in the world back in 2001. We’ll also have three nights snugged up in tents at the refugios peppered along the 76km (47 miles) W Trek. Friends of friends have advised, “Bring ear plugs. The wind is an ecosystem of its own.”

Again, Kim and I laugh in the face of wind. Maybe it’s a nervous laugh. We once spent two nights in Taganga, Colombia, in a hut on stilts (for $33US!). Totally sleepless, we wondered when we might wake up in a pile of collapsed timber because of the “crazy winds” that the owner mentioned with a smirk after payment. That hut swayed like Patrick Swayze’s hips! 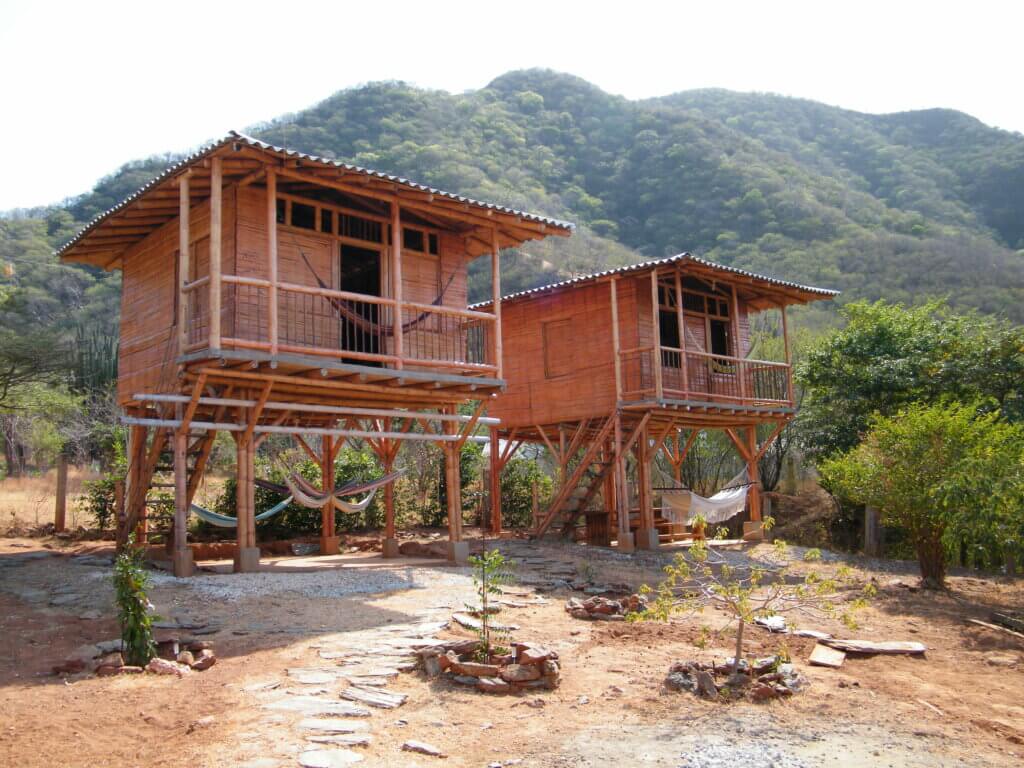 In Taganga, Colombia during the “crazy winds.”

The last few weeks have been a crush of research that has uncovered everything from the signature flying saucer clouds of Torres to a beer made out of condensed fog captured in Chile’s Atacama desert. I can tell you that the rumpless Araucana chickens (a Chilean breed) lay aquamarine-coloured eggs. The best “el completo” (hot dog) can be found at Antigua Fuente (a takeaway joint established in 1968). These hot dogs are buried in sauerkraut, avocado, tomatoes, salsa, aji peppers and swizzled in hot sauce. On a totally unrelated note, Darwin’s frogs can carry more than 24 live babies in their mouths. I can also tell you that a stealth and sturdy sheep wrangler can shear 120-150 sheep in a day. 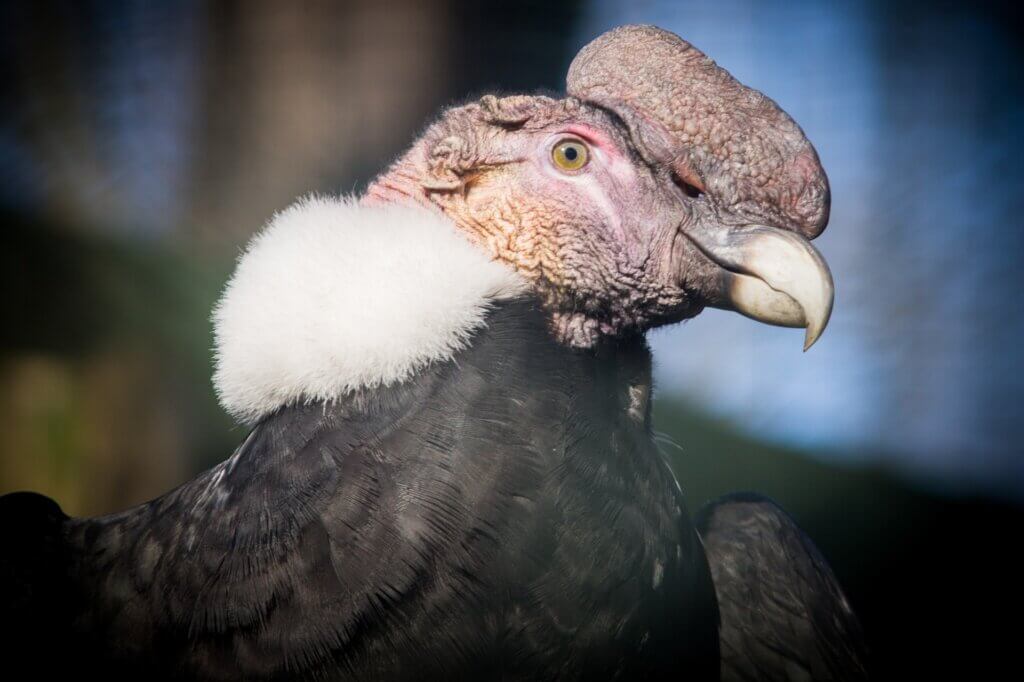 Yesterday, our neighbours asked, “What’s your goal bird?” They are intense birders as well and were envious of a friend who had just photographed a silvery grebe in Chile. Arni was overwhelmed by the grebe’s beauty, even in conversation. “Its eyes…” he trailed off. When I Googled it, his fawning made total sense.

As for a goal bird–well, I’ve compiled a list of hopefuls. The Andean condors are a common sighting but they are tops on my list and a true heavyweight. The condors are the heaviest flying bird in the world. Their pristine white fur collars really set them apart. Yes, they appear ominous but dashing in their own way. Other big bird encounters include the darling Magellanic penguins, Chilean flamingos (they can travel 400 km a day– or 249 miles if they are in America, looking for water), burrowing owls, giant hummingbirds (there is such a thing), crested caracara, rheas, black-necked swans, black-faced ibis and Magellanic woodpeckers.

Torres del Paine is full of curiosities from hairy armadillos to tarantulas, mistletoe, monkey puzzle trees and the true showstopper–the long-lashed guanacos. My sister has teased me with pics from her Chilean archives. 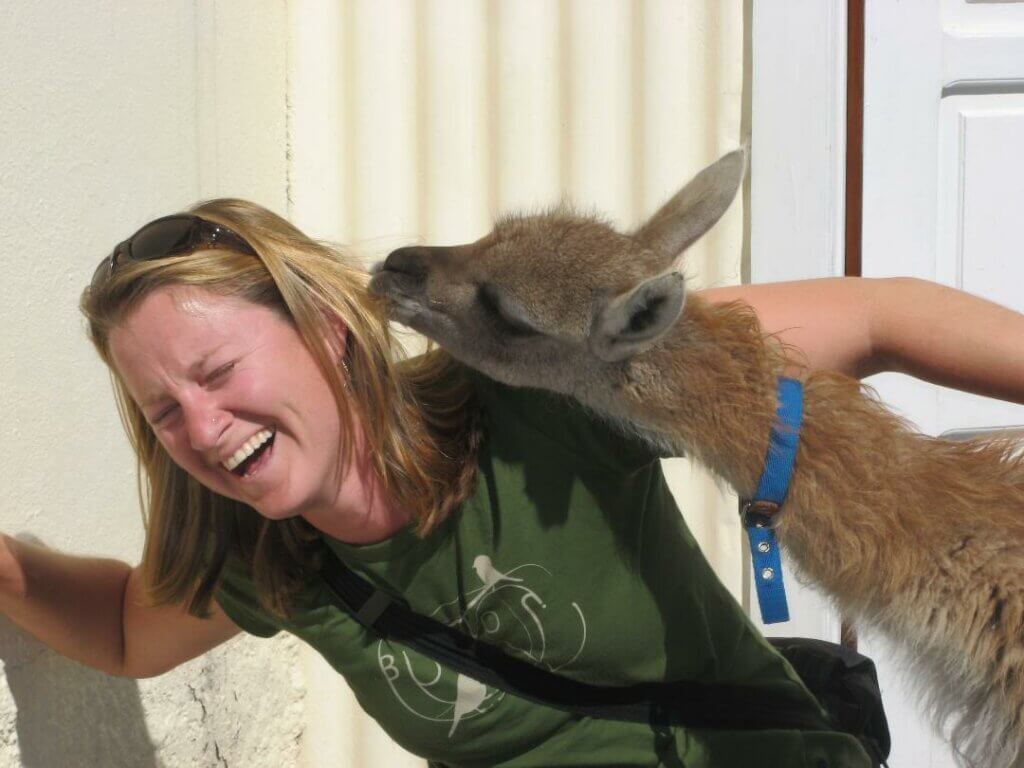 We’re eager to get there already–we’ve watched every doc available from Nomad: In the Footsteps of Bruce Chatwin to 180° South to Somebody Feed Phil’s edible episode on Santiago. Hell, we even watched footage from the Red Bull Soapbox Race in Santiago in 2016!

I think we’re ready. We’re armed with Farm to Feet socks (*I can hear my mother now, “You’ve spent more money on socks in the last year than I have in my lifetime!”). We have Clif bars. Trail mix. My stack of notes on where to see the wooden vomit spatula used by Amazonian shamans before taking psychoactive powers and poet Pablo Neruda’s hideaway built for his mistress. If we’re really adventurous, I know where Kim and I can learn the “la cueca” (it’s a handkerchief waving dance/ritual that mimics the courtship of a rooster and a hen). This seems vital as well. 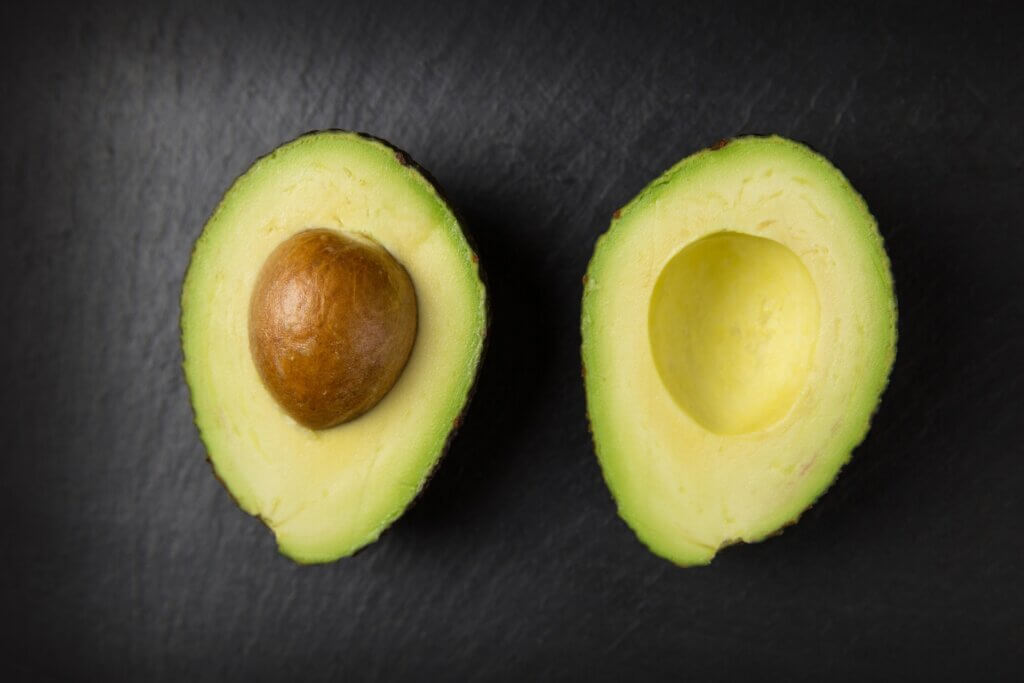 I have key Spanish words written down for quick reference–the most important being EL AGUACATE (which means avocado and that’s integral). Also, “choripan” which means chorizo sandwich and “terremoto” which translates to earthquake which is also a cocktail made out of white wine, pineapple ice cream and grenadine that my friend Andrew suggested.

For some reason I have that Creedence Clearwater Revival song in my head.
“Have you ever seen the rain?” I’ll sub in the wind and let you know all about it. Those Andean condors might be onto something with their white fur collars.

Be sure to tag along with Kim and I and our puma pack of Wild Women in Torres this February! 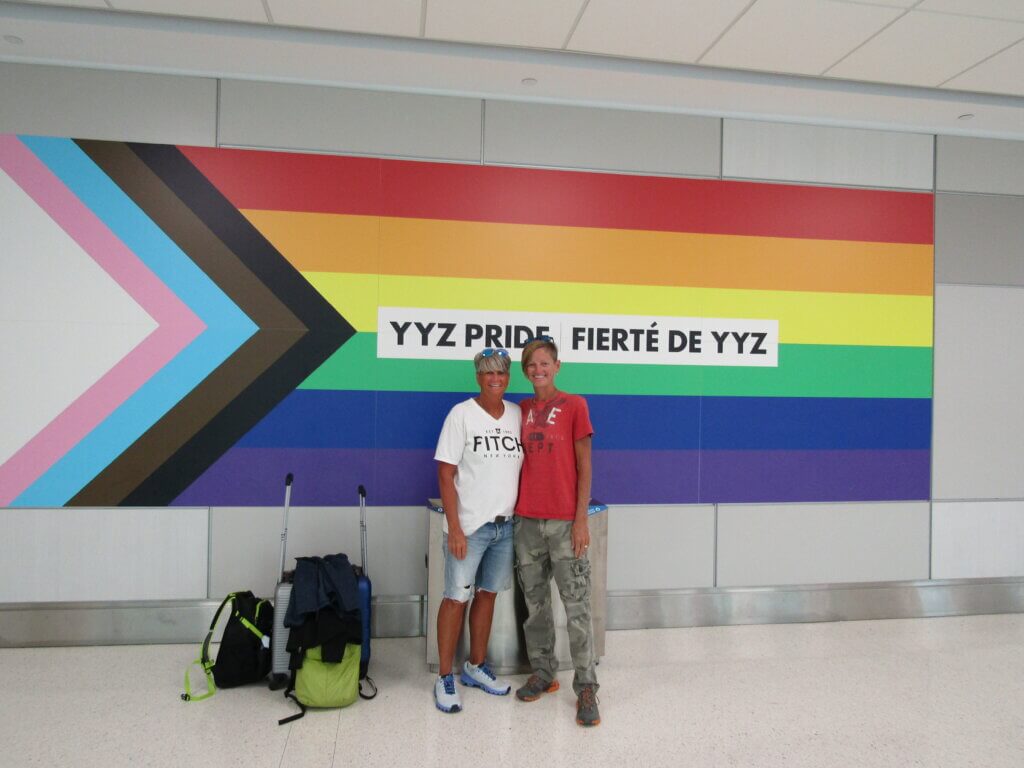 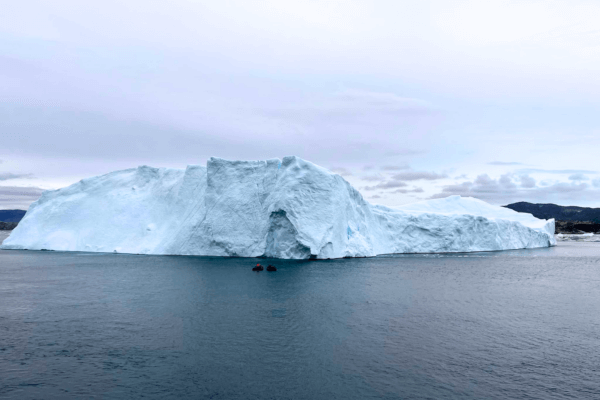 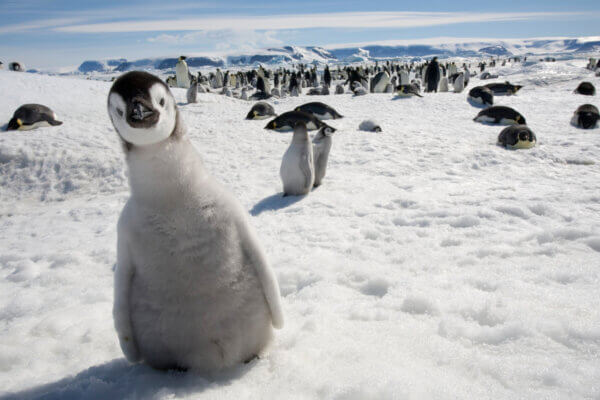 Your Guide to Antarctica: Which Trip is Best for Me? 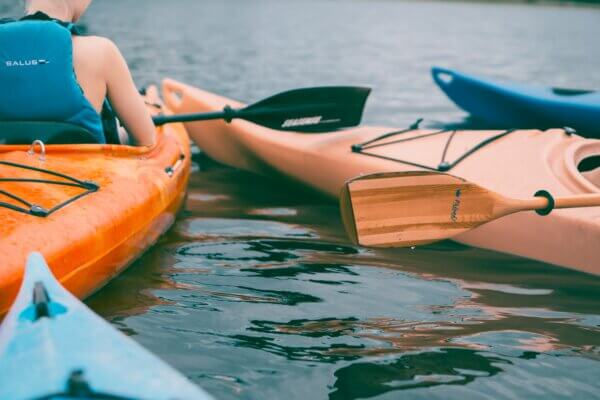 What Kayak Expedition is Best for Me? WWE’s Guide to Smooth Paddling
Share